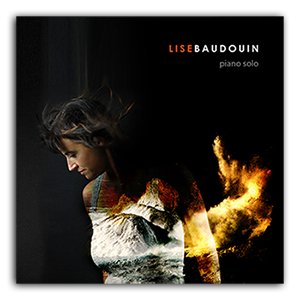 Lise Baudouin began playing piano at the age of 7 at the Academy of Caen in Normandy. After

several years of study at the Academy of Saint Maur des Fosses, in 2001 she entered the

in the classes of Georges Pludermacher and Jean koerner, a well as a unanimously approved

First Prize with honors in chamber music in the class of Laszlo Hadady. In 2008, she joined the

Since 2005, Lise Baudouin leads a career as a soloist, overall chamber musician, keyboardist,

accompanist and more recently as a choral conductor and composer.

She participates in many festivals in France and abroad: Soloists of Tomorrow, the Reims

As an incumbent pianist of the Multilaterale Contemporary Music Ensemble for 10 years, she has

participated to several radio programs : Alla breve, the Mondays of the contemporary, and played

Orsay and at Jakarta (Asia).

Paris Chamber Orchestra for performances at the Théâtre des Champs Elysées, the City of

Music, the Opera Garnier and the Théâtre du Châtelet.

In 2014, she co-wrote with director Emmanuel Meirieu music for the show Birdy. The same year,

she was appointed pianist of the contemporary music ensemble Quest Collective.

In 2016, she was invited by Ensemble Linéa to perform at Manifeste Festival (Paris), and

Ensemble Smash at Sound 59 festival (Perm, Russia). In 2017, she performs as a soloist and